Racial Disparities in COVID-19 Rates Are Rising in Oklahoma Prisons

As COVID-19 continues to spread, imprisoned people and those who work in correctional facilities continue to be particularly vulnerable. Running parallel to the devastation of a global pandemic unlike anything this country has seen in a century, the disproportionate over-policing and mass imprisonment of Black people locally has led to a troubling disparity in COVID transmission rates in our state’s correctional facilities. Prison overcrowding and other conditions make it virtually impossible to practice social distancing and maintain an adequate level of sanitization. This has led to a public safety and public health catastrophe in our local prisons that is affecting poor and marginalized people at an alarming rate.

According to the US Census Bureau’s statistics, Black Oklahomans make up 8% of the state population but 27% of the current prison population, imprisoned at a rate of 19.83 per 1,000 residents (more than 4 times the white imprisonment rate in Oklahoma) and Oklahoma has one of the highest rates of Black imprisonment in the US. 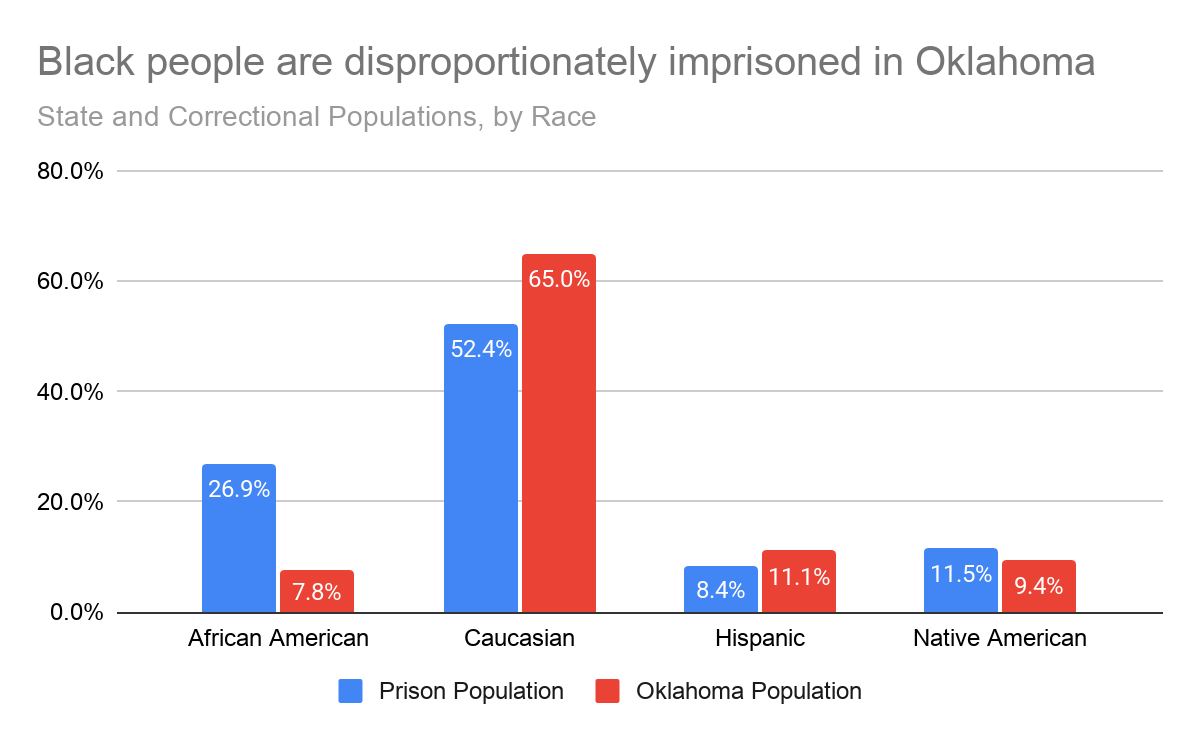 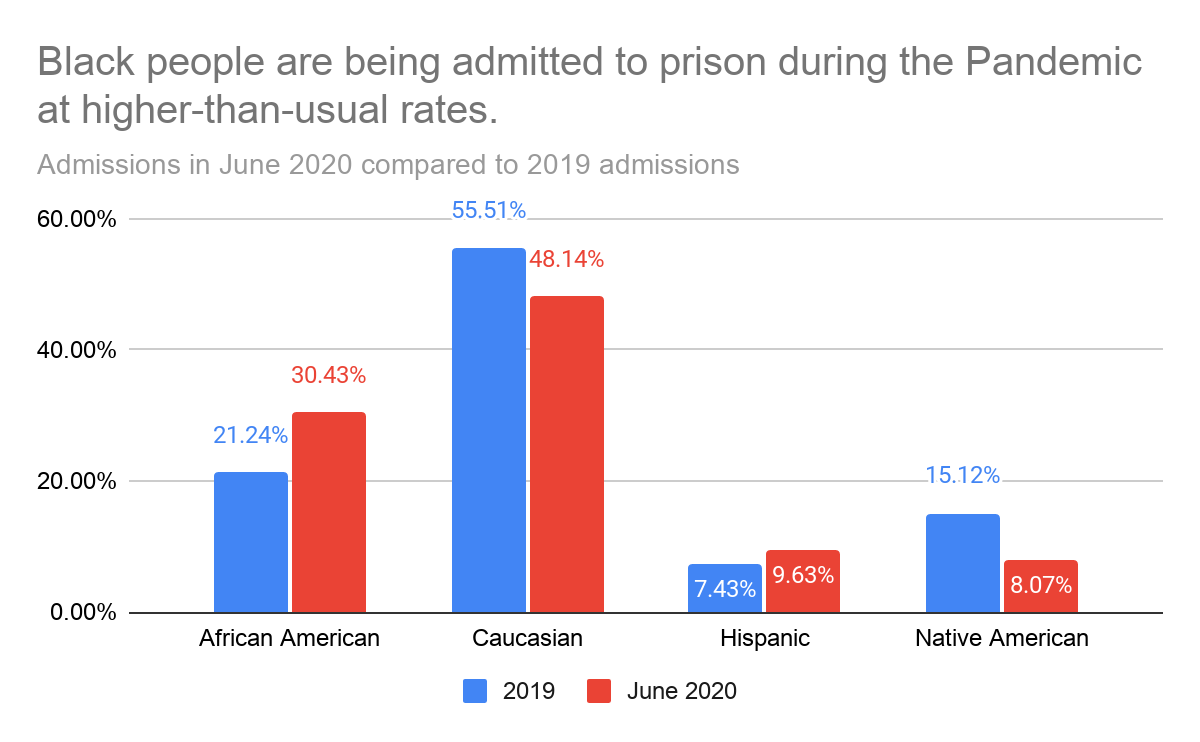 The majority (66%) of Black people admitted to prison in June 2020 were sent for nonviolent offenses such as possession of a controlled substance with the intent to distribute or unauthorized use of a motor vehicle. 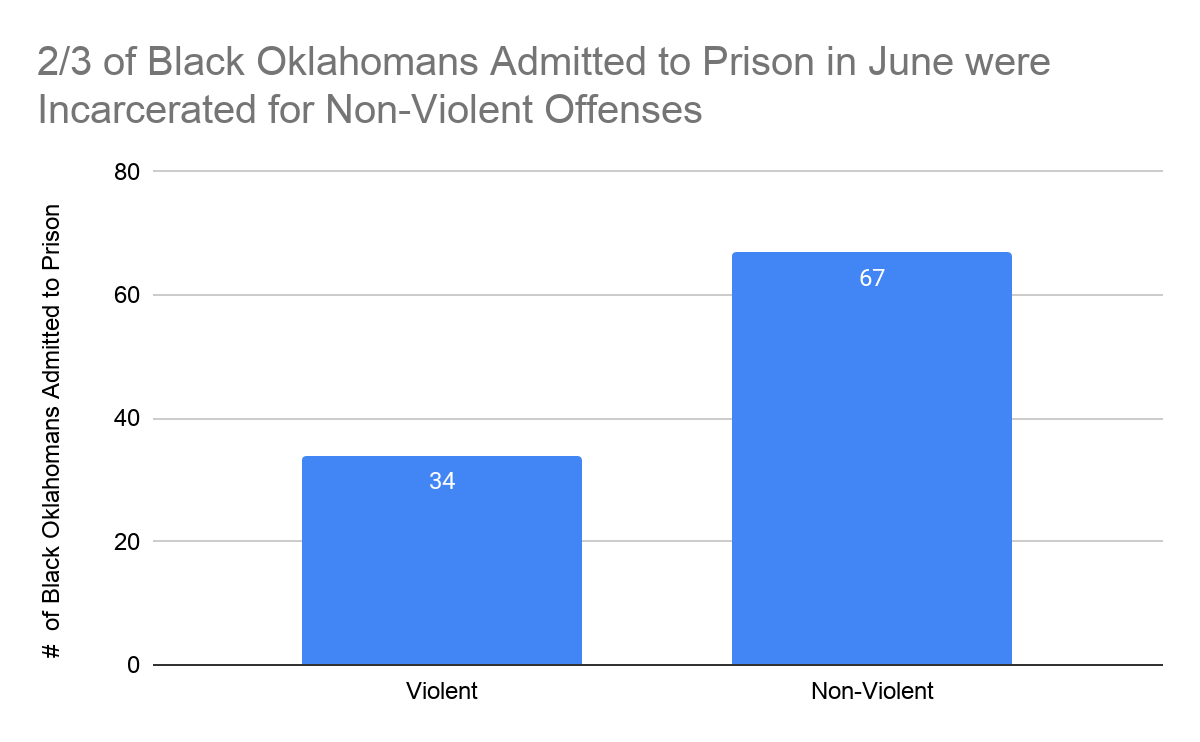 A disproportionate number of people admitted to DOC custody in June 2020 came from Tulsa County, 53.5% compared to 14% in a typical month. Though Black people make up 11% of Tulsa’s population, they made up 38% of Tulsa’s prison admissions during this time.

The racial disparities in June 2020 prison admissions in Oklahoma are a cause for serious concern. Prison and jail COVID-19 outbreaks are compounding racial inequalities. According to a recent report from the National Commission on COVID-19 and Criminal Justice, Black people are disproportionately more likely to contract COVID-19 and die of it, as are people in prisons and jails across the country. Oklahoma also has the second-highest imprisonment rate and the second-highest Black imprisonment rate in the country.

Public safety and public health experts have identified decarceration – the practice of lowering prison populations – as a crucial tool in preventing the transmission of COVID-19 in prison facilities, according to the National Commission on COVID-19 and Criminal Justice. Continuing to disregard the humanity of those behind prison bars not only put them and individuals they may inevitably come in contact with at risk, but also perpetuates a cycle of systemic racism and classism that will have adverse generational effects. It would be in the best interest of Oklahoma lawmakers to follow the lead of states like Arkansas, Kentucky, and New Jersey in further reducing incarceration by taking a proactive approach to lowering prison admissions as the virus continues to spread and imprisoned people continue to die.

You can read FWD.us and the Terence Crutcher Foundation’s full joint report here.

← White Allyship: The Magic Of Missing The Point
Men of No Nation: The Creek Freedmen and the Fight for Inclusion →